Army Form E.624, Consent to Service Overseas, signed by Pte. 1575 William Henry Viney on the 1st September 1914 at Bury. William H. Viney served with the battalion in Egypt and at the Dardanelles, he was discharged due to ill health on 17.8.1916.

Original discharge paper belonging to Pte. 1794 William Walton, of the 9th Battalion Manchester Regiment, who enlisted 14th February 1914 and was discharged due to ill health on 10.1.1916. (Certificate courtesy of his grandson, Alan).

A postcard sent to Mrs. Millar of 2, Rowley St. Dukinfield, by her son, Pte. 1324 JAMES SHAW MILLAR, from Southampton on the10th September 1914, just prior to the 9th Battalion's embarkation on the HMT Aragon bound for Egypt. The message on the reverse can be seen on the Homepage 1914 of this website.

A Christmas Greetings Card, sent to Mrs. Millar by her son, Pte. 1324 JAMES SHAW MILLAR from Cairo in 1914. James S. Millar was killed in action on the 8th August 1915 whilst serving with the 9th Battalion at the Dardanelles. Both postcards are courtesy of Mr. James Shaw Adams, nephew of James Shaw Millar.

The original notification received by Mrs. Case from the Records office at Preston, informing her of her husbands death whilst serving in France. Pte. 351651 JAMES THOMAS CASE, of the 1/5th battalion, and formerly of the 2/9th Ashton Territorials, who resided at 14, Ashton St. Dukinfield Hall, died of wounds on the 2nd September 1918. All items listed belonging to Pte. James T Case are courtesy of his Great grandson, Mr. Gareth Harrison.

A blood stained letter recovered from the pocket of Pte. 351651 James T.Case' tunic.

A Prayer book belonging to Pte. 351651 JAMES THOMAS CASE. This Prayer book was carried by James in his tunic pocket together with some papers. They are blood stained, and bear the bullet hole that killed him. These sad items were returned to his wife after his death.

Pictured on the beautiful matchbox holder below is Pte. 350715 Eugene Melia of the 1/9th battalion. Eugene Melia enlisted at Ashton at the outbreak of the war, and volunteered to serve abroad. He was just 19 years of age and the son of George and Mary Melia of 13, Poplar St. Audenshaw. Whilst with the 9th battalion, Eugene had learned the art of semaphore and served as a Signaller. He suffered from the effects of a mustard gas attack but recovered well enough to be transferred to the Labour Corps, where he served as Pte. 649617. Whilst serving in the Labour Corps Eugene spent time guarding the Chinese Labourers of the Corps. At the end of the war Eugene returned home and married his sweetheart, Ada Mallinson, the sister of his friend, Pte. 3371 Frank Mallinson, also of the 9th battalion, who had died through being gassed in France on the 3rd May 1918. Eugene and Ada had four children, Colin, Derick, Norman and Catherine. At the outbreak of WWII, Eugene Melia's service to his country resumed. He became a Voluntary Interceptor, being part of M I 8, he was issued a radio receiver to intercept enemy signals which were then decoded at Bletchley Park. At the end of WWII Eugene resumed his occupation as an engineer, working at Muscamps until his retirement. Eugene Melia passed away in 1964. His service to his country done. The photos of Eugene Melia and Frank Mallinson on this website are courtesy of Eugene Melia's grandson, Mr. David Jones.

Below : Original letters written by Pte. 4027 ROBERT CAMPBELL of A Company, 3/9th Battalion whilst in training at Southport in 1915. Robert Campbell was born in Ashton in 1880, one of nine children of John and Hannah Campbell, who resided 147, Church Street, Ashton. In 1893 Robert's eldest brother, Thurston Campbell, set sail from Liverpool for the USA, where he settled in Fall River, Mass. Over a period of some thirteen years Thurston's brothers and sisters followed in his footsteps, leaving Ashton bound for Fall River, and a new life. ROBERT CAMPBELL boarded the S.S. Saxonia at Liverpool on the 20th February 1906 bound for the port of Boston. He soon settled in Fall River, working as a bartender. At the outbreak of war, ROBERT CAMPBELL answered his country's call, proudly returning to England where he enlisted in the Ashton Territorials, 3/9th Battalion Manchester Regiment. Sadly ROBERT CAMPBELL was never to see England or the USA again. Whilst serving with the 9th battalion in the front line trench at Epehy, France, on the 29th April, 1917, along with his pals, Pte. 350582 Harry McCluskey and Pte. 350809 James McDonald, ROBERT CAMPBELL was killed in action. All three pals are buried in the Tincourt New British Cemetery. 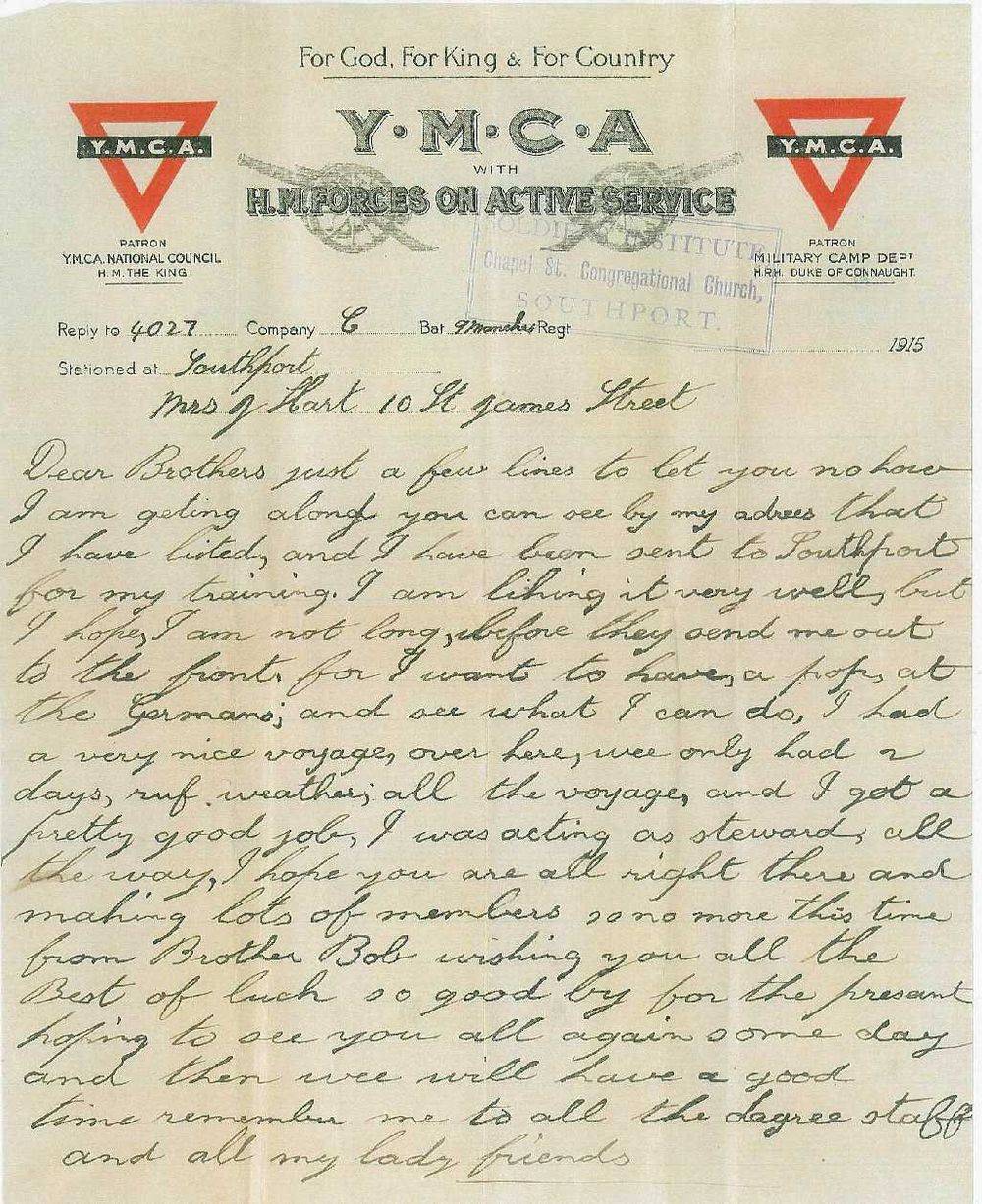 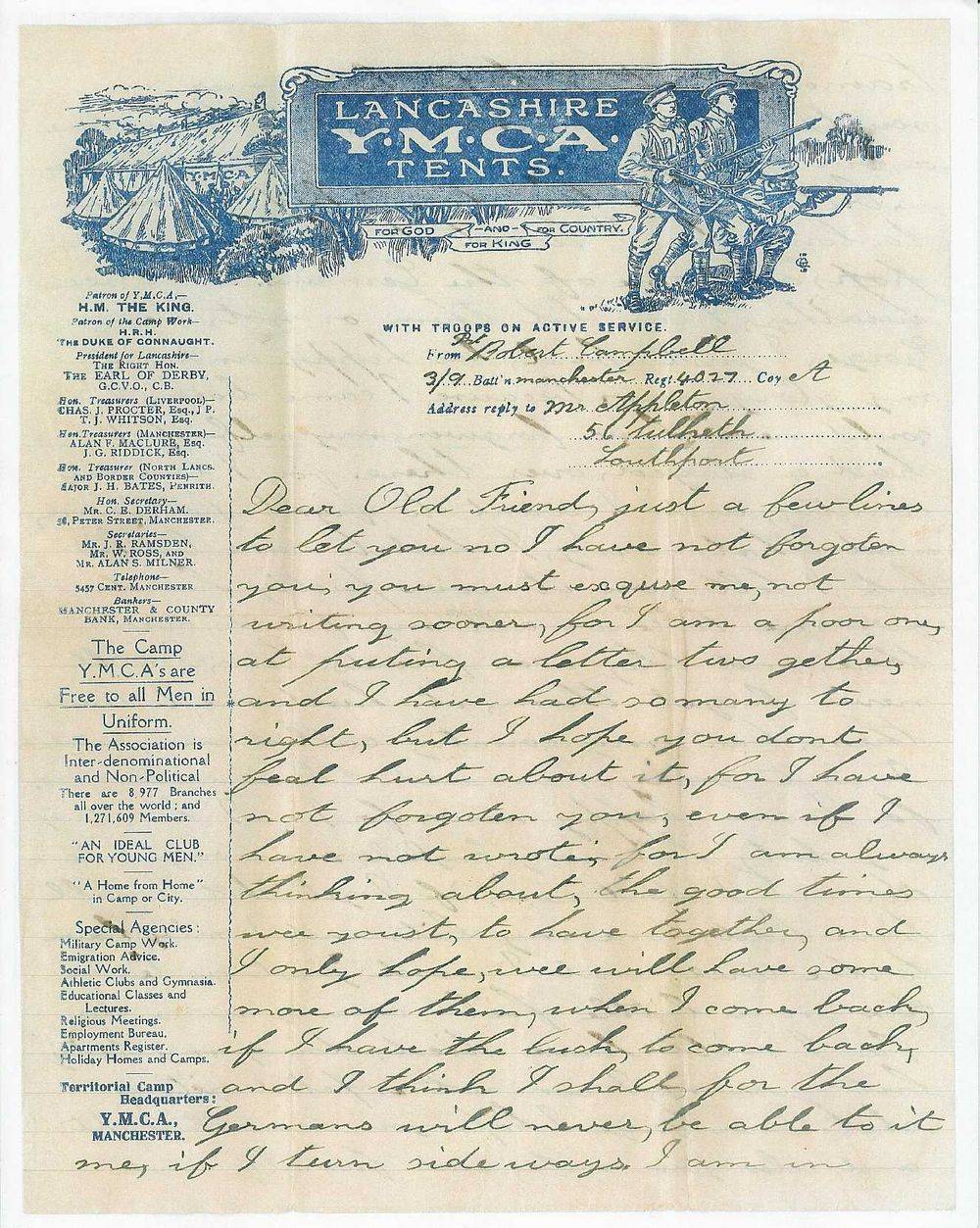 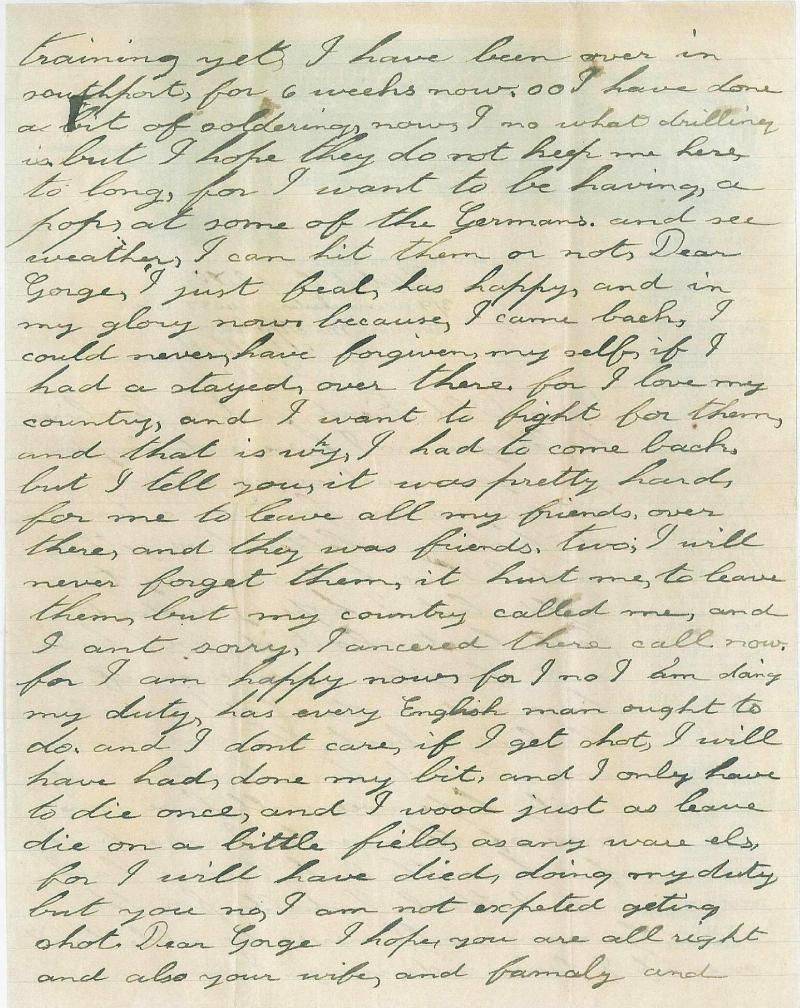 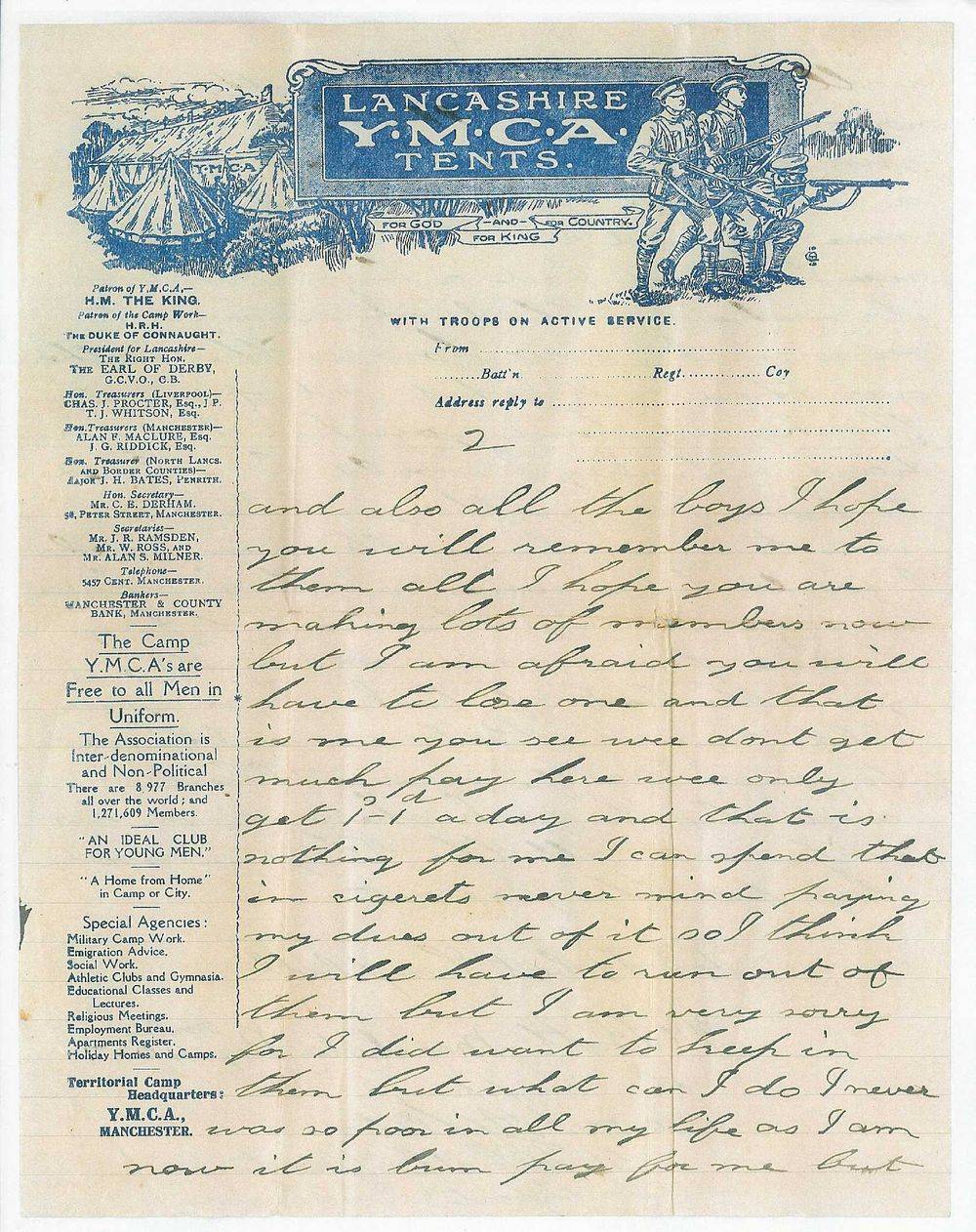 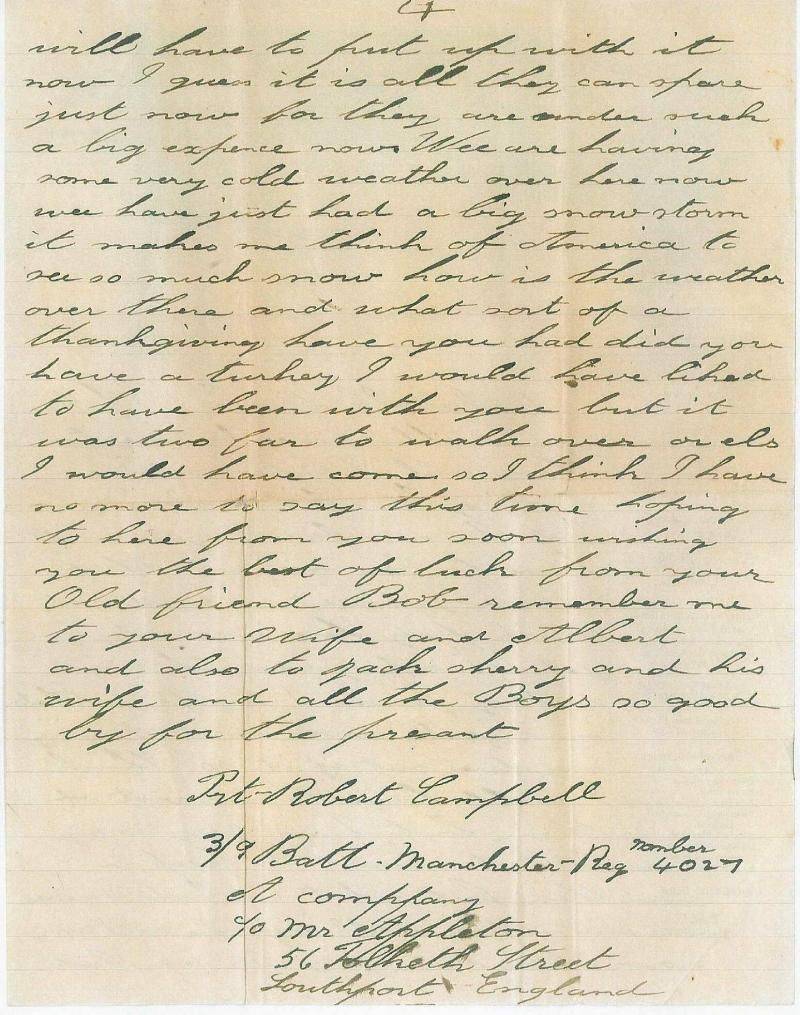 Below: The Death Penny, 1914-1915 Star and British Medal issued to Pte. 1825 HUGH CAMPBELL WHITE, of the 9th Battalion Manchester Regiment, attached to the 18th battalion. His parents, Mr. & Mrs. William White, of 121, Welbeck Street, Ashton, were informed of their young sons tragic death in February, 1917. Pte. HUGH CAMPBELL WHITE was killed on the 29th January 1917 in a fatal bomb accident, when a hand grenade burst prematurely. He was just 19 years of age. Lieut. Marsden wrote of him, "He was one of the bravest boys that I have ever known." HUGH CAMPBELL WHITE is buried in the Beauval Communal Cemetery. (Photos courtesy of Andrew White). 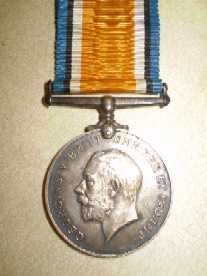 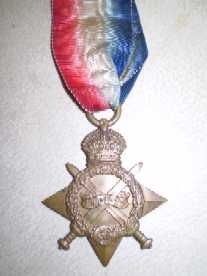 Pte. 1833 (350430) JOSEPH HAGUE, son of Joseph Eli and Mary Ann Hague, of 12 Paradise Street, Hurst, enlisted in the 9th Battalion Ashton Territorials on 18th March 1914. He was 17 years of age and had worked as a spinner at the Atlas Mills, Waterloo, Ashton. At the outbreak of war JOSEPH HAGUE went with the Battalion to Bury where he volunteered to serve overseas. He accompanied the 1/9th battalion throughout the war, serving in Egypt, the Dardanelles, France and Belgium. Being an agile young man standing 5ft 3" tall, he had served as a ‘Runner’ in the trenches. He was discharged on the 27th February 1919 and resumed his occupation as a cotton spinner.

Photos by kind courtesy of his grandson, Danny Rearden.